The Three Peaks Cyclocross is special; it comes just once a year, and its placement on the calendar stands as tall as the wall that is Simon Fell. All of the unique style training and hard work stands for one day. One slip up or major mechanical and all that ‘trudge’ training comes to no use; you don’t see many 10 minute long sets of steps at your average cyclocross race.


For the 2016 edition, my preparation started earlier than all my previous race completions. And boy did it pay off. For the first time, my race was free of even a hint of cramp, a burden that, in a previous race, has forced me to come to a standstill on the descent of Pen-y-Ghent. Double the amount of hill reps compared to last year, and more hours in the saddle throughout the year were a recipe for a good race.

The start of the race was fraught with nerves and twitchy riders. Rain had doused the Yorkshire Dales for the hour before the start of the race, meaning damp roads, and the head of the race seemed more compacted than ever. It was harder, and more dangerous, than ever to make any moves up the bunch. Rather than 5km of supposed neutralised racing, it felt like the front end of a road race coming into the final stages before the line.Everyone was wanting to be in the same place, the front. After moving up and down the bunch like a yoyo, a last ditch move around the outside moved me up right near the head of the bunch, just before turning off the road to Gill Garth. It was time for the real racing to begin.

Simon’s Fell never gets less sickening; no matter how much training you do, or how many times you have done the event, you can never be ready for the perilously steep slopes of the first of the ‘Peaks’ offerings. I pushed hard up Ingleborough, knowing that it’s so much harder to regain places in the latter stages of the race. You’ve gotta suffer up Ingleborough, then just keep on suffering. My placing at the summit of Ingleborough was the highest of my 4 completions, and it set a good president for the rest of the race. Rocketing down to Cold Cotes, I lost a handful of places, but nothing extreme. I couldn’t risk ending my race by having a nasty crash in the sometime invisible deep bogs that litter the decent. Eventually, I reached the bottom, hurting, but unscathed. 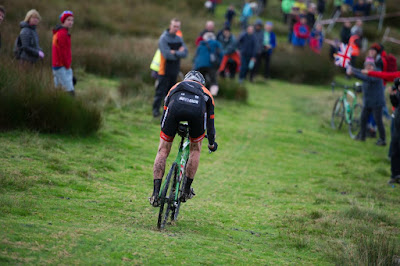 En route to Whernside, I worked with one other rider and we pushed on to try and reach a group just a couple of hundred meters up the road. By the bottom of Whernside, we hadn’t quite caught the group, but I had survived an incredibly near miss on a greasy cattle grid at 20 odd mile an hour. Although losing a few seconds, it did seem that luck was on my side, thankfully avoiding what could have been a race ending event. 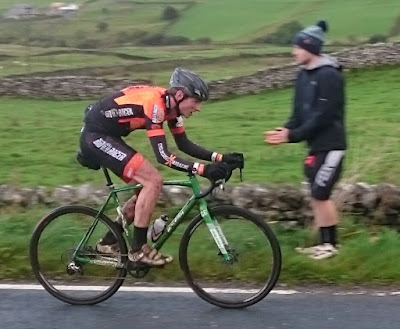 The sun came out at the bottom of Whernside, and I thought it a great idea to roll down my arm warmers, learning from experience of over heating during the event in 2015. I cracked on with the gruelling climb up the Whernside steps, almost becoming immune to the pain radiating from my legs. What I didn’t realise was that I would soon become numb from the pain with the help of a deluge of cold rain all along the ridge line of Whernside. The thought occurred to me that if I even slightly reduced the effort I was enduring, hypothermia would become a real risk. Skin tight lycra isn’t the best mountaineering clothing after all.

As rugged and intimidating the descent of Whernside is, it almost felt like a familiar affair. I had looked at and practiced line choices before the event, and after going over it in my head over and over, I had it nailed. I gained about 5 places as a result and reached Ribblehead feeling fired up. 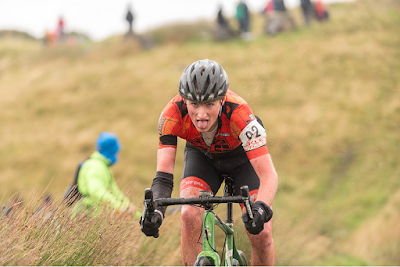 I soloed the road section to Horton in full TT mode. I gained one place en route, not slowing to work with the guy I passed. I hit Pen-y-Ghent lane with full force.

My calved were really screaming now and the hill of wind loomed large ahead. After turning onto the higher footpath section of the climb, the ordeal reaches its most painful. The existence of fresh legs feels a distant memory, and no matter how easy the gear is on your bike, it still ain’t easy enough! My whole body was telling me to get off and push, but although easier, it isn’t faster walking. My last reserves of energy were used to lift my wheels over the stone ribs that make the almost impossible ride just that little bit harder, until finally I succumb to the pain and push my bike on foot.

The last sections of Pen-y-Ghent became a blur, with minimal energy to power my brain and the prospect of the lights going out pretty likely. I finally reached the summit cairn before such an atrocity occurred.There was just the small matter of getting down to attend to, if only it was an easy affair.

What seems like a pretty smooth path on the ascent, becomes a bone rattling and hand cramping rollercoaster of a ride. All the previous attrition to your muscles becomes amplified, and the thought of the finish is all that gets you through. Puncture free, I hit the road at the bottom and began the final onslaught to the line; for on my wheel was a fairly strong looking Austrian rider, who had accompanied me for much of the race. Although working together for most of the section, it boiled down to a man on man sprint for the line, which he unfortunately got the better of me for. But, on the other hand, that was it…

Finished. Finito. Fini. The pain was over.

My time was 3:23:13, 5 minutes faster than my previous personal best, and my placing was 20th, my first time in the top 20. I was pretty damn happy with that. And to boot, I managed to bag the under 23 trophy and also 3rd in the father/son category with my dad- a pretty successful race. 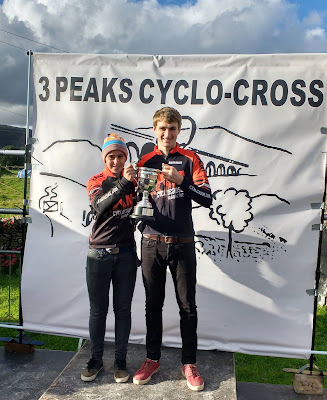 For the second time, my Raleigh RXC Race performed brilliantly, with no mechanical hiccups whatsoever. For the fourth time, my Vittoria tyres remained puncture free and gave me ample grip. So if you need some advice, ditch those land cruisers and get on the line to Vittoria!

I would like to thank my brilliant support crew for being there with a spare bike throughout the race, and passing up the necessary nutrition to get through such a brutal, yet beautiful, race. Also, a thank you to Bioracer Omnipex who supplied the awesome looking kit, which I got to race around in.