2014 Off With A Bang- Ripley Castle CX and York CX

New Year's day is the scene of celebration, drunken antics and people staying awake long into the morning of New Year's day. Normally, I wouldn't blink an eyelid and I'd be engulfed in this scene, with me probably ending up doing very little the following day. However, on New Year's day was the Ripley Castle Cyclocross race, a race that has been on my calendar for a long while. This gave me a dilemma: have a good race or have a good night.

Hmmmm… why not try have both? It was New year's after all…

So, after a reasonably fun night with all my mates, with 'some' alcohol being consumed, I got up on New Year's day as late as I possibly could. I'd ridden the course the previous day, so I had the gist of all the corners, straights and obstacles. All I needed to do was rock up, sign on and race. Simples! And, although I had for some reason I had woken up with a slight headache, I didn't feel too bad.

It was weird to see Ripley filled with hundreds of vans and bustling with familiar cycling figures. Normally a sleepy, tourist village only miles from my front door, it seemed the complete opposite scene to when I usually cycled through Ripley. One thing that was quite familiar was the rain, which poured down in bucket loads! I made my way over to signing on, pushing passed the many spectators and film crews (which was a different sight for cyclocross in the UK). But before I was able to sign on, I was collared into doing some filming for Look North, with a GoPro on my bike. I couldn't say no!

It was when I was riding parts of the course with the GoPro that I realised what the rain had done. What was lush green grass the previous day was now a quagmire, with almost every corner riding completely different to my recce the previous day. Thankfully, rain doesn't affect tarmac, cobbles and woodland so much, so those parts of the course weren't too different. In the race, they'd prove a welcome break to conditions similar to the Somme! But, to give you a quick insight into the course's features, here's a few words that sprung to mind: mud, steps, scaffold-bridge, cobbles, roots, disco-temple (oh yes!), adverse camber, hurdles, gravel, wood-chippings, oh, and some awesome local spectators!

So, onto the race. To start, I was gridded on the second row; I positioned myself behind Paul Oldham, knowing he'd set off well and would probably end up winning the race. So, as the gun went, and I broke my shivering stance on the start line, I put feet to the pedals and the red mist of racing came down. Within 100 meters, sleek, lycra clad cyclists, me included, had become mud men, with muddy water dripping from both bikes and bodies.

My start was good, and for quite a while I had contact with the lead group. But the pace of Oldham and Bibby on the front soon smashed the race to smithereens. After about a lap, the chaos settled down a tad and I found myself in a group with Chris Barnes and James Thompson.

The nature of the course didn't allow much 'working together', so it was more of a battle than gentlemanly affair. Eventually, Chris got away, but the elastic between me and James didn't break. James put in some big efforts on the straights, leaving me scrapping behind with my legs burning, but I too tried to get away, using my strength in running to get away on the off camber section alongside the ha-ha wall.

A couple of laps later, and I was starting to fatigue, and James eventually got a significant gap on me, which was helped by me being cocky and attempting to bunny hop the hurdles, which ended up with me on the ground. Nevertheless, I pushed on, hoping to catch any rider unfortunate enough to have a mechanical or crash. One such rider was Jake Poole, who I soon caught up and passed, but was obviously not 100%, most likely due to the horrendous weather.

The last few laps passed by, seeming no easier than the previous frantic laps playing cat and mouse with James. And so it was, the last lap; all I needed to do was keep up the tempo and roll home, but it wash't to be the case. Just after passing the pits for the last time, I rolled my rear tub on the hairpin bend. S***, I thought. But, straight away set off running, hoping no one would catch me before the line. I exchanged a glance with my dad in the pits, which I can only assume looked like a mixture between sadness and annoyance.

Unfortunately, I was caught by two riders before finally crossing the finish line, knackered, muddy and a bit peeved off.

I finished the race in 15th position, which looking back wasn't too bad. But minus the rolled tub and the strange headache I woke up with, it would have been much closer to a top 10 placing. Back to the glueing board!

I also raced, last weekend, at York Sports Village, after deciding not to go down to Shropshire for the National Trophy. It was the third time I'd ridden the venue, with the course pretty similar to the night event I did there before just christmas. It wasn't a massive event, so I was hoping to come out with a podium position.

On the day, the course was greasy on top, with some very boggy sections before and after the finish line. Sadly, due to rolling my mud tubular at Ripley, I had to use a much less grippy tyre on the rear wheel, which made cornering very sketchy.

For the majority of the race I was playing catch the mouse. Tom Ramsey, Crosstrax, had set off like a bullet from a gun and had a 12 second gap after the first lap. This left me and Darren Binks suffering in his wake.

It wasn't until the penultimate lap that we caught Tom. I couldn't take the corners as fast as Darren and Tom, so this hampered my lap by lap gains and sometimes left me digging deep to latch back onto Darren's wheel. When the junction with Tom was made, the tempo slowed right down; it was obviously going to be a very tactical finish.

Just before receiving the bell for the last lap, I made a break for it on the tarmac section of the course. I managed to stretch out a 20 meter gap. But, turning back onto the mud I managed to overshoot, definitely carrying too much speed. Tom was back on my wheel, but I had managed to break Darren, who was still 20 meters behind us.

Tactically, I went into the sloppiest corners first, so that Tom couldn't gain any advantage with my lack of grip. This worked, and we stayed together until passing the pits for the final time. This was where I made another attack, it was all or nothing.

On the tarmac I managed to string out another gap, maybe 15 meters this time. I turned left, back onto the mud, but must have subconsciously taken it too cautiously as Tom had latched back onto my wheel. There was only 100 or so boggy meters to the line. Both me and Tom were aiming for the right hand line, which had seemed to be the fastest. Both of us converged onto the marginally drier line, but managed to collide. Tom went down, but I just about kept up and pushed on.

I crossed the line with my first ever Senior win! It was great to put my hands in the air and take the top step of the podium, especially with it being so close to the end of the season. 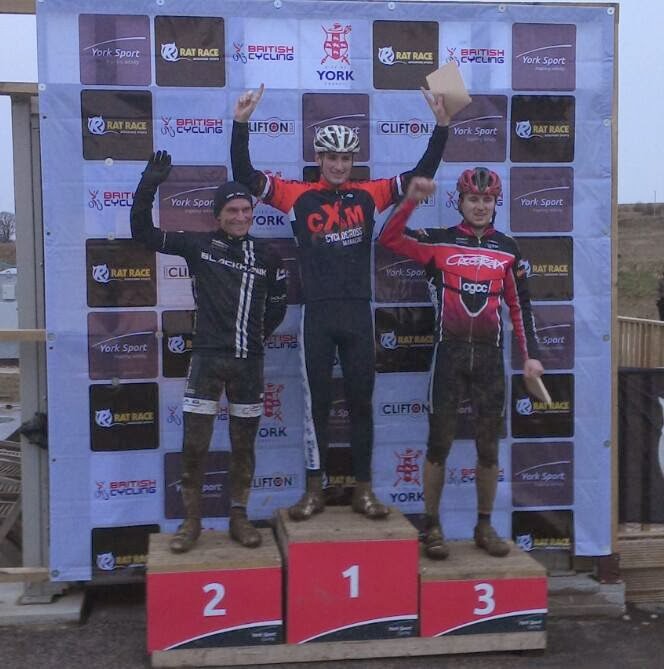 For both Ripley and York, I would like to thank my dad for pitting and cxmagazine.com for the kit and support. My final race of the cyclocross season will be the National Championships this weekend in Derby, then it'll be all eyes on the mountainbike!
Posted by Unknown at 18:41