A lot of people think that there is no such thing as luck. Supposedly, the more training and preparation that you do for something the luckier you get; in other words saying that luck is just another way of denoting the amount of preparation someone has done. Although I believe this to be true, in a bike race you will always need a bit of pure luck. Last month I experienced very little luck, resulting in a DNF because of a mechanical, a missed race because of illness and another mechanical, reducing any chances of winning the race. November was an incredibly frustrating month, and I wanted to start December off on a positive note, hopefully, with a good result at the North of England Cyclocross Championships.


To the soundtrack of Muse and White Lies, I arrived at the venue, York Sports Village, nice an early, with time to get a practice lap in and watch some of the other racing. The Senior race, which I was competing, was not starting until 2:30, so I was still deciding whether or not to put my bright winter lights on for the later stages of the race.


From afar, I have to admit I didn't really like the look of the course- it looked flat and a bit 'tame' for my liking. I've never really suited flat, fast course; hard gruelling climbs, tight technical singletrack descents and a good load of running was more my cup of tea. But, on my practice lap I found that the course had more depth than just an off road crit race circuit; there were a few stings in the tail. The course began with a number of sweeping, slippy corners, some being off camber, which snaked their way around the area in front of the sports complex (I'm sure any spectators watching the swimming would have been distracted by the more interesting event happening outside). After one final sharp left corner, the course headed straight, passing the pits for the first time, and up to the higher part of the course. A number of switchbacks took the course higher up the gradual banking. At the top was two very slippy off camber climbs, which had multiple route choices and felt like a balancing act between power and stability while riding them. Following on from this, the course entered deeper mud, where the course took a sharp right over a steep sided ridge. In practice I was able to ride the ridge, but sharp drop coming off of it resulted in a momentary front wheel manual. Definitely a runner in the race. From there, the course headed down towards the pits again, with a tight chicane and a few sweeping corners on the way. From the second passing of the pits to the finish there was very little technical riding. The course followed a fenced ginnel, before emerging on the neighbouring road race circuit, for the final stretch of the lap. You don't usually have such a long section of tarmac in cyclocross races, but this section really added something to the course and I thought it was pretty cool- a nice component to a pretty fun and varied course.

Anyway, onto the race.

Being the North of England Championships, the field size was about double the size of a normal Yorkshire Points race. The cream of the crop had come from the North East, North West and, of course, Yorkshire to battle it out here in York, which added to my surprise when upon gridding I was called up for the second row- there was no excuse for a bad start now!

Thankfully, come the fire of the gun, I got my foot in and was away and still high up the field 200 meters up the road. The skittishness of riders behind me on the first corner adided my advantage. Entering the offroad section for the first time, the field had already become strung out, but I was sat in the top quarter and was hungry for more places, I felt good. 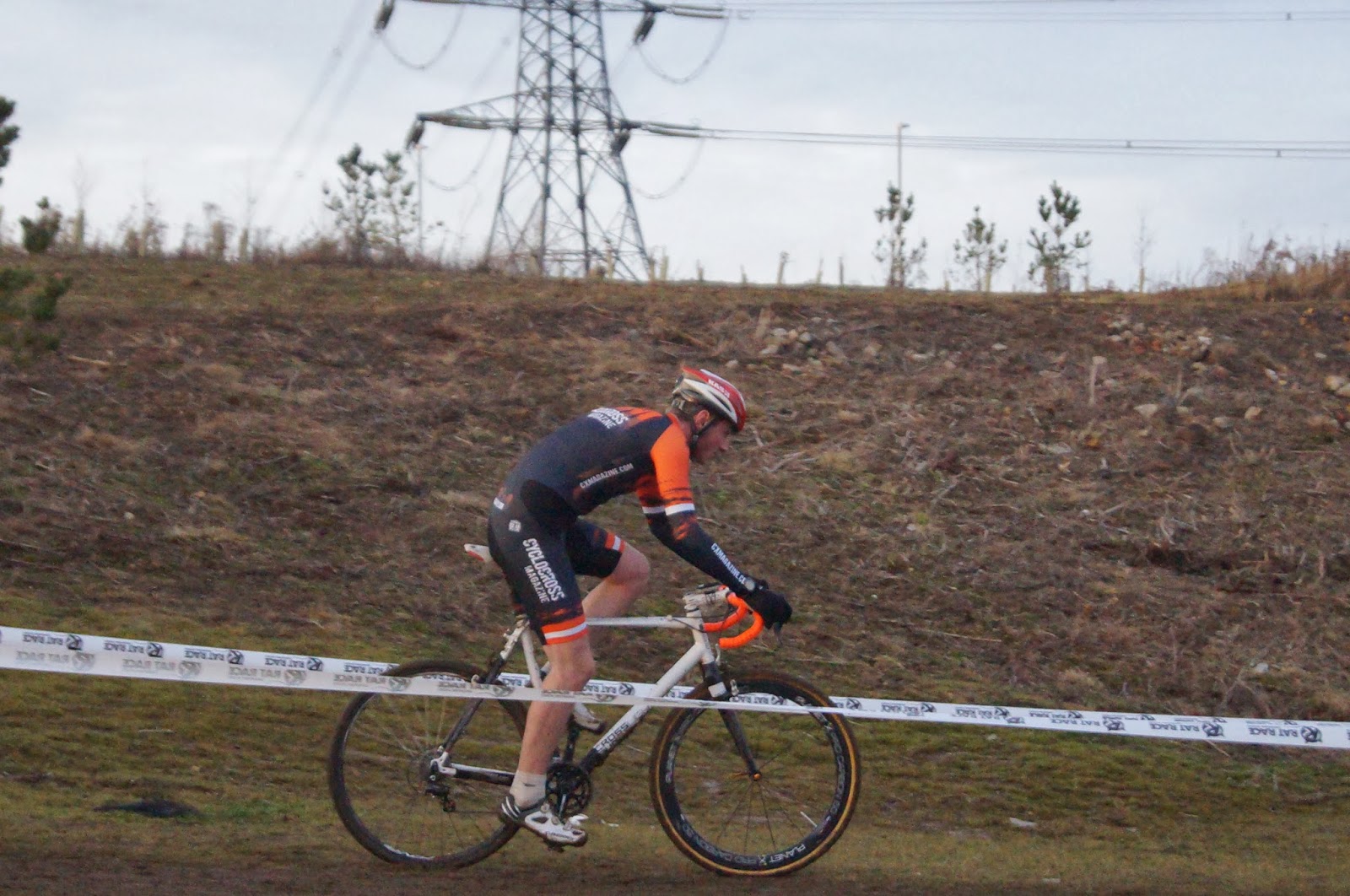 Not long after, gaps began to form and grow, gaps that I made it my mission to bridge. I managed to pick off a few places without any major injects of pace; I simply maintained a good tempo and gradually caught up with the next wheel up the road. I was ahead of the usual race nemesis Dave Morris, as well as a few others I'm normally battling with. Feeling comfortable, I watched the minutes tick by on my Garmin; but maybe I was feeling too comfortable, for behind me, gaining time on me each lap, was Ben Cooper, a fellow under 23 and a threat to my current position in the class.

A couple of laps later, Ben bridged the gap to me, immediately trying to pass and drop me, but I was straight onto him and sat on his wheel. By this time, I had worked out that me and Ben stood as second and third under 23 on the road. My main focus went on sticking with Ben and trying to get that second place.


I sat on Ben's wheel for most of the race; we were both pushing hard, but he couldn't drop me, and all I wanted to do was stick with him. I didn't even think of riders up ahead, but I knew no one could catch us. In my head, I was planning on attacking Ben with a lap to go, and do as little work as possible during the sections with headwinds.

With about 1 to 2 laps to go, I made my move, trying to get a gap on Ben. I pushed hard for maybe a quarter of a lap, but I didn't succeed and we came back together. I could tell it was not just me who was fatigued; Ben and me were both breathing deeply and suffering a little. Unfortunately, this got to me more and just before receiving the bell to signify the last lap, I made a stupid mistake on the off-camber section, loosing some time, and Ben got away. I chased hard. I couldn't let him get away after our near whole-race ordeal.


Just after the bell, I got back onto the wheel of Ben, but this time I was definitely more fatigued than him. I couldn't pass him, so just sat on his wheel and tried to get a little respite. But then came that off-camber banking again. It was either psychological or just plain fatigue that caused me to make the same mistake I made the previous lap, but nevertheless, it resulted in the same outcome. Ben got away again, which left me chasing.

With less than half a lap to go, Ben had about 30 meters on me, and I was digging desperately deep to claw it back. We both entered the tarmac section, running up to the finish line, with about 20 meters between us. We sped round the final two corners, coming into the final straight, with Ben still ahead. I stood up, putting in all I could to try and get him on the line. But it was not to be. Ben finished just under 10 meters ahead of me, meaning I finished as 3rd under 23. A bit annoying, but hey, 3rd is still pretty good.

There was a silver lining to my slight annoyance though. The battle between me and Ben in the final couple of laps meant we made up about 3 places overall in the Senior race. This meant that we finished 11th and 12th, which I have to say, I'm pretty damn pleased with. It was nice to see that a bit of proper training was taking effect, and I was definitely in a good mood that evening.

Finally, I would just like to say thank you to my dad for pitting for me, as usual, to my mum for the photographs I have used, and also to cxmagazine.com for kit and support. Check them out at http://www.cxmagazine.com where you can currently get 10% off a subscription, a perfect gift for any cyclocross fan this christmas. If you want the voucher code, just drop me an email and I will happily sent it out to you.

My next race will be the National Trophy cyclocross at Peel Park, Bradford this Sunday. It's gonna be a muddy one!