On, off, on, off, on???
Heavy snowfall across the country had placed huge amounts of pressure on British Cycling, who now had to decide whether to cancel the opening round of the National XC series. Ruin the plans of the people travelling far and wide from Northern Ireland and Scotland or run the risk of health and safety and some people not being able to get to the race? Anyway, for me, a few weeks of focused training could only lead me to believe that the race was indeed on...
For many year, Sherwood Pines has been the opening round of the National XC series; famous for its fast racing, flat relief and peaty soil. Trying out the course on the day before the race, it was apparent racing wasn't going to be its usual road race-esque style.
Entering the course on the event arena, I was hit with a rutted, sapping and slippery straight. Usually, this would be where the sprints for the line and crucial taking on of food and drink would take place; now, it was about as easy as walking a tightrope. If the 'easiest' part of the course was like this, I'm not sure I was ready for what was to come.
Leaving the start straight, the course headed towards the trees, where the ground became deep in mud and snow. A usual fast section of the course was now just a mass of turns. There were a few let ups to the slog, though; short downhill sections, where bike control was paramount, and some lengths of fire road, which although weren't deep in mud, had become incredibly narrow, with there only being small snow cleared tracks along them.
The later half of the course proved no different- mud, uphill drags and barely an easy section. It was going to be a hard race, which would've been made even harder if I had kept on the same tyres that I did my recce laps on. So, after a quick stop at the bike shop on the way home for some tractor tyres the race machine was ready!

"Beep... Bee" Alarm off straight away, it was 9am, no need for an early start today. Oh the joys of having pre-ridden the course the day before! Quick check outside for snow, no more had fallen, quick check on the British Cycling website, race still on, stuff chucked in the van and off we set.
Even with porridge in hand and Arctic Monkeys on the stereo, it wasn't the most relaxing of drives. I was put on snow drift look out, with parts of the dual carriageway only one lane wide due to them. So I was unable to slip back into my usual pre-race trance, which involves contemplating how much better the warmth and comfort of the van is compared to the pain and cold of racing.
Anyway, signing on done, race kit put on and hole dug for the turbo trainer, it was time to 'warm up'. This is where your mind either completely blanks out, which mine does in most cases and did then, you psych yourself up or every bad race situation goes through your head. I've tried psyching myself before a race before, and it really doesn't do me any favours; I end up going off like the clappers and just going backwards for the entirety of the race. Thinking of bad situations pre-race doesn't really need to be explained as to why it is a bad idea. 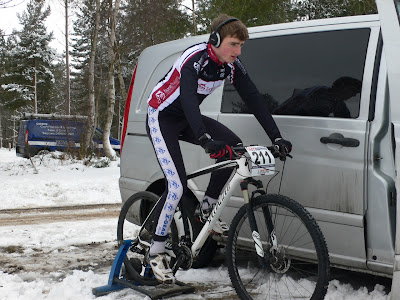 Time for the start...
Somehow, running on last year's national rankings, I found myself on the front row the grid, amongst most of the race favourites. But I didn't let this faze me and the red mist came down... "I shall be starting you in the next 10 seconds" says the familiar Australian voice from behind.
GO!
Missed my pedal. Damn. Not a great start. 20 meters later and I've managed to get my foot in. I'm not too far down. We all bunch together, speeding into the first two corners. Man down! Last year's national champion, Sam Stean, wiped out on the inside of the first snow covered bend. A few go down with him. Thankfully, I was on the outside and I now find myself up in a top 10 position. I'm feeling ok, and I manage to move up a further a place or two. I'm now in about seventh place. 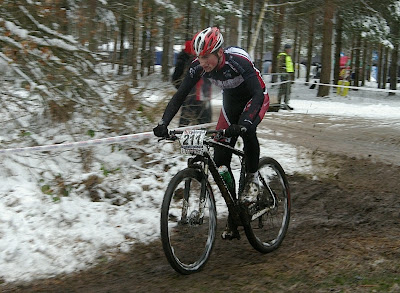 I maintain this place until about midway on the first out of three laps. That was when we hit the fire road. The previous tight singletrack had caused a build up of riders, all wanting to move up the field, some who had been taken down in the crash on the first bend. It was manic. The familiar red, white and blue stripes of Sam Stean went past, along with a bunch of riders. I put the power down and tried going with them, which lasted for a few hundred meters, tops. My legs just weren't there, nothing could make them work any harder. 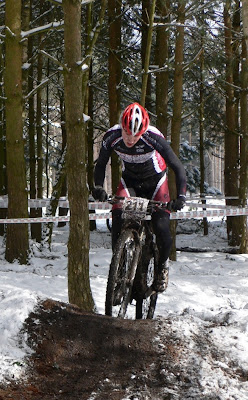 That, for me, was the turning point of the race. After such a good opening half lap, I now continued to slip down the field: 13th at the end of the first lap and 16th at the end of the second, accompanied by some rather painful cramp in my lower back. 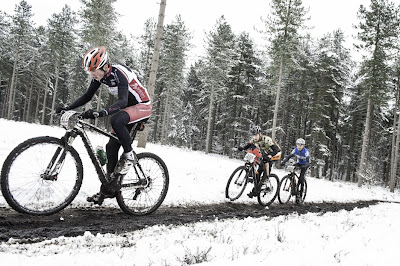 For the final lap, I was battling with Harry Forshaw, with each of us putting in valiant moves. But in the end it was him who had the better legs, and he finished one place ahead of my in 15th position.

It didn't feel like a great performance; I was really chasing a top 10 position and 16th didn't do it for me. I had rested the week before the race, so logic would suggest I'd have fresh legs. But that's racing; you have good days and you have bad days.
All I could do was go back to the drawing board, assess the problems and hopefully come back stronger next time.
I would, however, still like to thank my sponsors, boneshakersbikes.co.uk for supplying kit, to all the photographers that braved the weather, to my dad for being a great runabout as always, and especially to the race organisers for keeping the race on, despite the weather.

My next race will be at Catterick Garrison for the second round of the Nutcracker XC series on April 21st. Until then, happy riding!